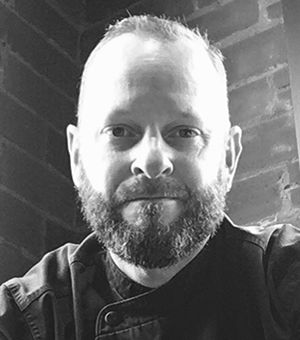 After beginning his culinary career at The Harraseeket Inn in Freeport, Maine, Warren went on to further his culinary education at Johnson & Wales University in Providence, Rhode Island. He then returned to Maine to learn every station in the kitchen under the supervision of Sam Hayward and an amazing team of talented Chefs.

After moving to Indianapolis in 1996, Warren worked as a sous chef at The Woodstock Club and Midtown Grill before taking the reigns as Executive Chef at Lulu’s Restaurant and Kahn’s Catering.

He went back home to Maine for a few years to run fine dining restaurants in Kennebunkport and the Lakes Region before returning to Indiana after the birth of his first child. He spent seventeen years running the kitchens at Kahn’s Catering in Indianapolis and The Ritz Charles in Carmel before joining the Garment Factory team.

A long-time south side resident, Warren is happy to be working in his own community where his children attend school, and he volunteers with The Sertoma Club of Greenwood.